A Centennial Celebration of Our Buildings in Morningside Heights 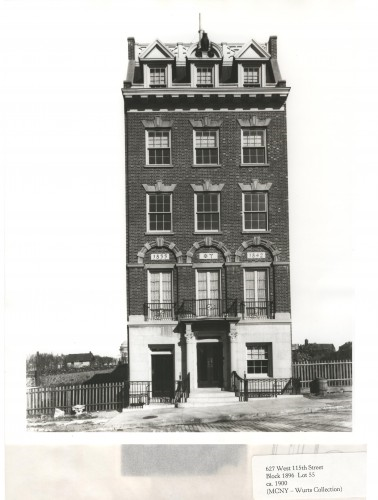 Photos courtesy of the NYC Municipal Archives, Mueseum of the City of New York, Library of Congress, and New York Public Library. 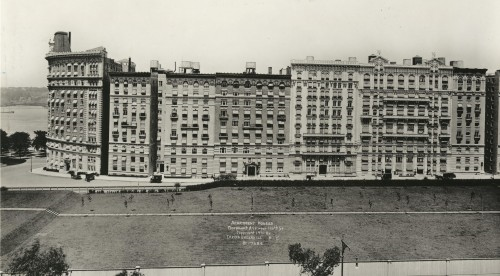 Imagine living in a neighborhood where, block after block, stretches of empty lots are being quickly replaced with new buildings; all around you, new institutions are establishing firm foundations; and a new subway line has opened to much fanfare. This was the scene around Morningside Heights during the first decade of the twentieth century, a time in which this neighborhood we call home started developing. It is important to not only recognize this significant period in the growth of Morningside Heights, but to also acknowledge the many buildings in our neighborhood that have recently celebrated or will soon celebrate a centennial this decade.

A significant number of the residential buildings in Morningside Heights were built  between 1900 and 1910, with the majority being built in the second half of the decade. Between 1905 and 1910, permits were taken out to build over 150 buildings in the neighborhood. Of the residential buildings Columbia University currently owns, 60 of them were built in that 5-year period, with about half that number having been built between 1909 and 1911. The majority of these elegant structures can be found along Riverside Drive, Claremont Avenue, between 116th and 120th Streets, and on broadway.

Prior to the early 1900s, residential development consisted mostly of row houses and single family construction, a direct contrast to the newer buildings. These buildings were constructed with ornate facades, luxuriously appointed lobbies and interiors, large apartment layouts, and generous amenities, all of which were intended to attract  middle class residents.

The neighborhood's growth was spurred by the establishment of several religious and educational institutions. They include Columbia and Barnard College, Teacher's College, Jewish Theological Seminary and Union Theological Seminary. St. Luke's Hospital was also in the area and St. John the Divine Cathedral was being built, but perhaps the most important factor in accelerating residential development was the opening of the IRT subway in 1904. The subway lines brought convenience in the commute of Columbia students and residents alike and piqued the interest of developers, who were attracted to the prime location. This was heightened by other neighborhood amenities, such as the presence of Riverside and Morningside Parks and Grant's Tomb.

Most of the residential buildings built during the early 1900s still exist today, and you may live in one of them. Although there have been changes to some of the buildings, they have essentially retained their solid character and continue to provide us with safe and comfortable homes. One wonders if their designers and builders could have imagined them still standing strong after 100 years.

Although we are highlighting the importance of this period in Morningside Heights, there is more detailed information about our buildings and this historic decade. To learn more, please read Morningside Heights: A History of its Architecture and Development by Andrew S. Dolkart, Columbia University's James Marston Fitch Associate Professor of Historic Preservation and Director of the Historic Preservation Program.

If you have personal stories or historic information about our buildings that you would like to share, please send them to facilities@columbia.edu.