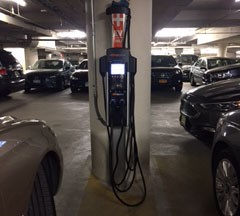 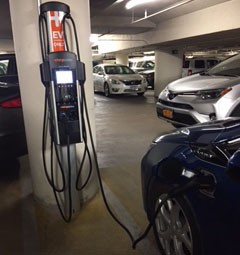 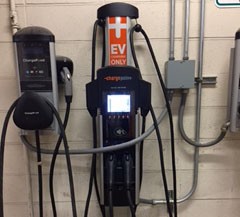 The 560 Riverside Drive charging station was newly installed over the winter, with a dual-port charger up and running by December of 2017.

Upgrades in the ETG and IAB garages include the replacement of single-port charging stations with dual-port ones, doubling the charging capacity in both garages. Each of the four stations (two in ETG and two in IAB) can now accommodate four cars at a time. The upgraded stations are operational as of July 1, 2018.

inFO is a monthly email with news from across Columbia University Facilities & Operations. Check out the February 2020 edition here.

Each year, Facilities and Operations utilizes winter break to perform a significant amount of projects across the University, many that could only have been completed when the campus is less populated.  This winter break was no different, with Facilities and Operations completing a wide range of projects at the Morningside campus, including grounds improvements, classroom upgrades, and public space.

Dos Toros Taqueria, a fast-casual restaurant known for NorCal–inspired Taqueria cuisine, is the latest Columbia University retail tenant to open its doors.  Patrons can celebrate the opening with Dos Toros and receive a $5 burrito today (February 12) at their new location during the times of 11:30 a.m. to 2:15 p.m. and 5:30 p.m. to 7:30 p.m.

Vicki Dunn, Assistant Vice President of Dining, was recognized for the second time as one of the most influential women in the Education sector of Total Food Services list of Top Women in Metro New York Foodservice & Hospitality.

Inspired by work with the Earth Institute, Columbia Event Management is excited to offer a Sustainable Living menu curated to feature local ingredients, focusing on vegan and vegetarian options. Menu selections are updated frequently to reflect fresh and seasonal options.