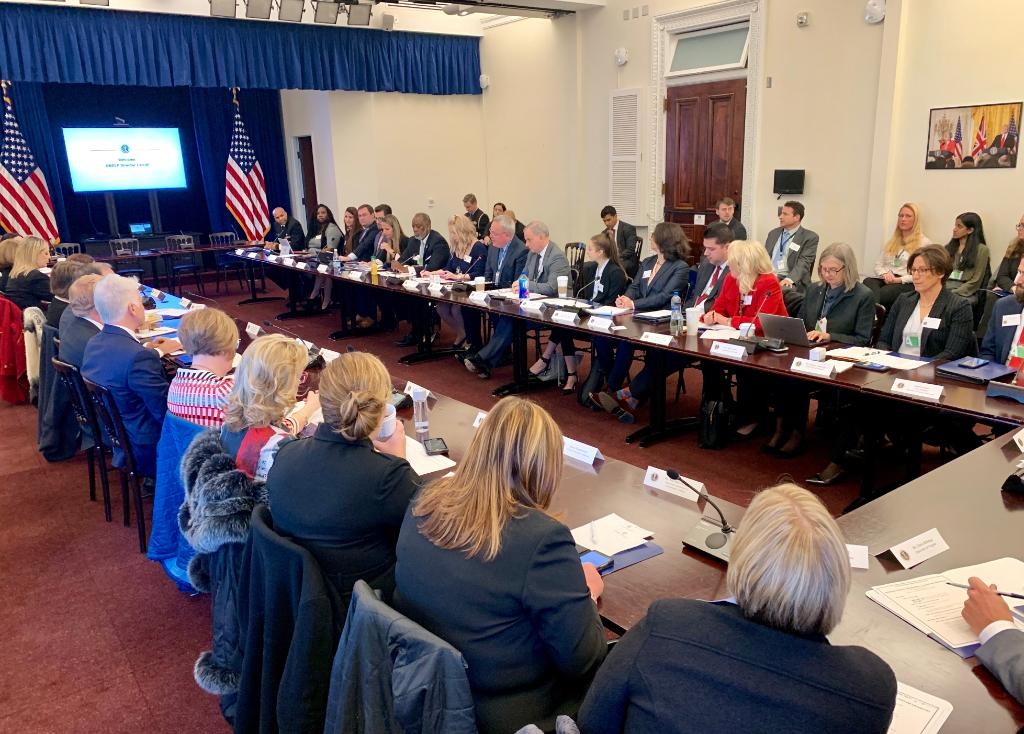 Representatives from colleges and universities and harm-reduction advocates at the White House. 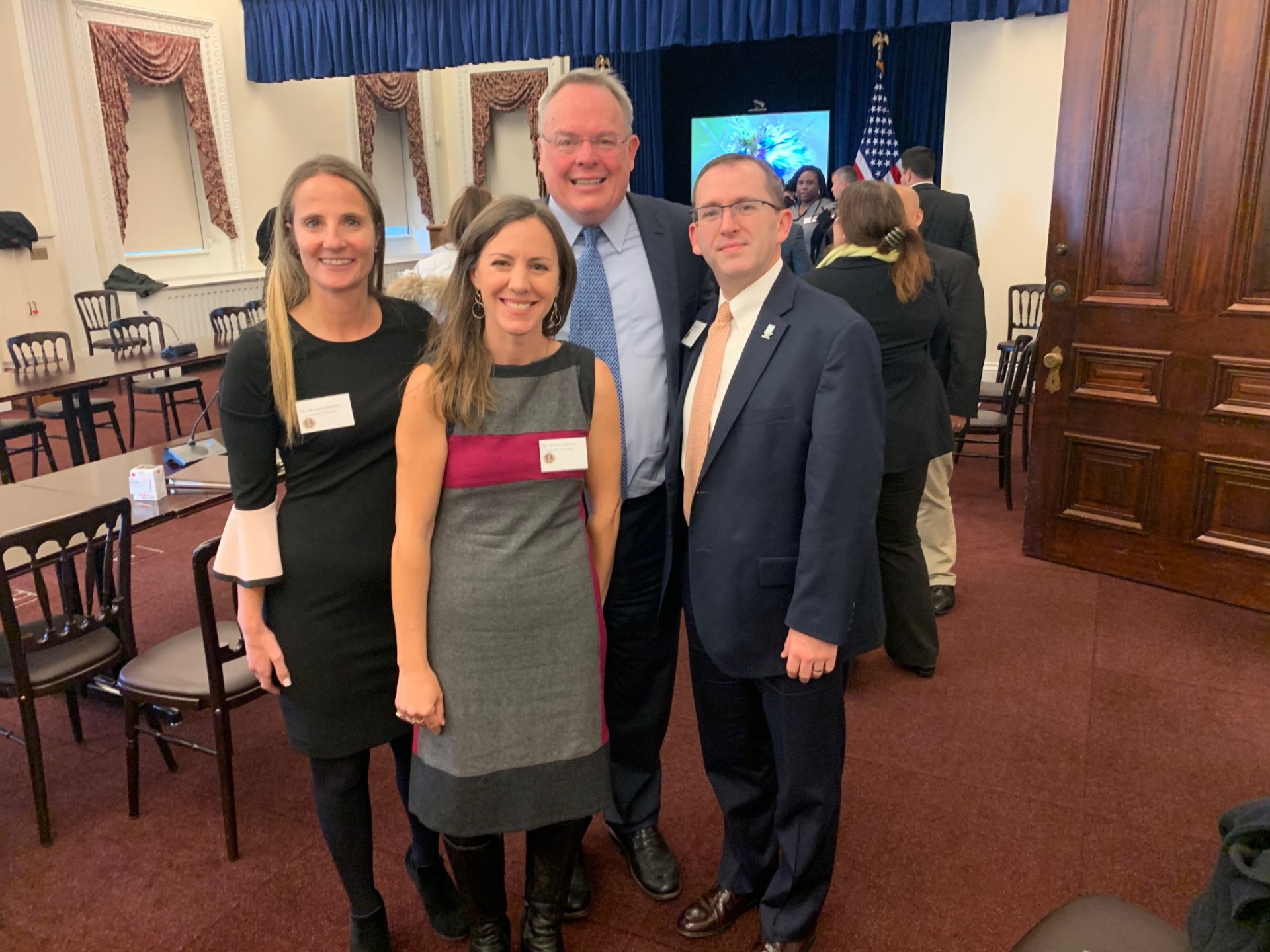 In response to the rising concern around opioid usage and potential for overdose on college campuses, the Office of National Drug Control Policy (ONDCP) hosted the Addressing Overdose and Response at Colleges and Universities roundtable on November 13, 2019 at the White House Eisenhower Executive Office Building to discuss how campuses are combating the opioid epidemic.

As one of the few institutions in the nation to have designed and implemented a comprehensive naloxone training program geared towards the entire campus community—students, faculty, and staff—Columbia was invited to speak about its experience on multiple panels for invited participants including college and university officials, harm-reduction advocates, national higher education associations, and other federal officials.

The University’s naloxone training program is part of a multi-disciplinary initiative between Columbia Health, Columbia Mailman School of Public Health, and the Columbia School of General Studies. This evidence-based effort is informed by a research grant led by Rachel Shelton, ScD, MPH, Assistant Professor of Sociomedical Sciences at Columbia University Mailman School of Public Health and Lisa Rosen-Metsch, Dean of Columbia School of General Studies, and funded by Columbia’s Irving Institute for Clinical and Translational Research. Since August 2019, the program has trained 661 members of the Columbia community to recognize signs of opioid overdose and administer lifesaving medication. Furthermore, the naloxone training program aligns with objective 11 in the Columbia-JED Strategic Plan to ensure substance use policies and protocols best support students.

The Naloxone Availability/Access Models on Campuses panel featured Columbia Health Associate Vice President and Medical Director, Melanie Bernitz, MD, MPH, along with representatives from the University of Texas and Louisiana Board of Regents. ONDCP Assistant Director for the National Opioids and Synthetics Coordination Group, Kemp Chester, moderated the discussion.

Dr. Bernitz shared how Columbia’s program model leverages the power of individually trained community members. Given the smaller physical campus size but highly mobile population, students and staff move beyond the borders of the University and New York City on a daily basis, allowing naloxone to not only be available within the campus gates but in the broader community. She noted that implementing naloxone trainings for the campus community has provided Columbia with the opportunity to address the dearth of research in this setting and contribute crucial learnings to the field of college health.

Columbia Health Chief of Administration Michael McNeil, EdD, CHES, FACHA, participated in Implementing an Overdose Plan on Campus, alongside an official from Kennesaw State University and moderated by Chris McCaghren, EdD, deputy assistant secretary for higher education programs of the Department of Education.

Dr. McNeil reported that in the first three months, Columbia exceeded the training target set for the entire grant year. The accelerated rate at which the community was trained is in part due to the plan’s emphasis on establishing partnerships and coalitions with stakeholders at every level, from students to high-ranking University officials and internal departments. With unprecedented interest from the campus community, the challenge has been to balance demand for trainings with qualified facilitators and supplies of naloxone kits from the Department of Health.

Another key component of Columbia’s plan was to identify and engage with key student sub-populations who were in close proximity to students who may be more likely to use opioids misuse or are highly connected and influential leaders on campus. Dr. Rachel Shelton discussed research findings based on Columbia’s experience, with representatives from the Zeta Tau Alpha National Fraternal Organization and Association of Recovery in Higher Education in the Working with Special populations on Campus panel, moderated by ONDCP Deputy Director, Kendel Ehrlich. Dr. Shelton presented recommendations for overcoming barriers to participation and facilitating engagement in training among special populations including Veterans, athletes, Resident Advisors, fraternity and sorority members, and students in recovery based on focus group research.

Additional presentations included Naloxone 101, by Surgeon General of the United States, Jerome Adams, MD, MPH.; Naloxone on Campus: A Parent’s perspective, by Co-Founder of Safe Project USA, Mary Winnefeld; and a panel on Mental Health and Records Privacy, featuring representatives from the Department of Health and Human Services and the Department of Education.

Attendees were receptive to the information and expressed that the Columbia panelists made the topic easy to understand and demonstrate a promising way forward. Many were interested in bringing naloxone to campuses, keeping the programs sustainable, addressing institutional barriers to implementation, and reducing stigma. Some attendees also raised the issue of looking at underlying mental health concerns linked to opioid abuse.

Columbia Health and its partners are in conversation with the ONDCP to advance the conversation about opioid overdose and college health.