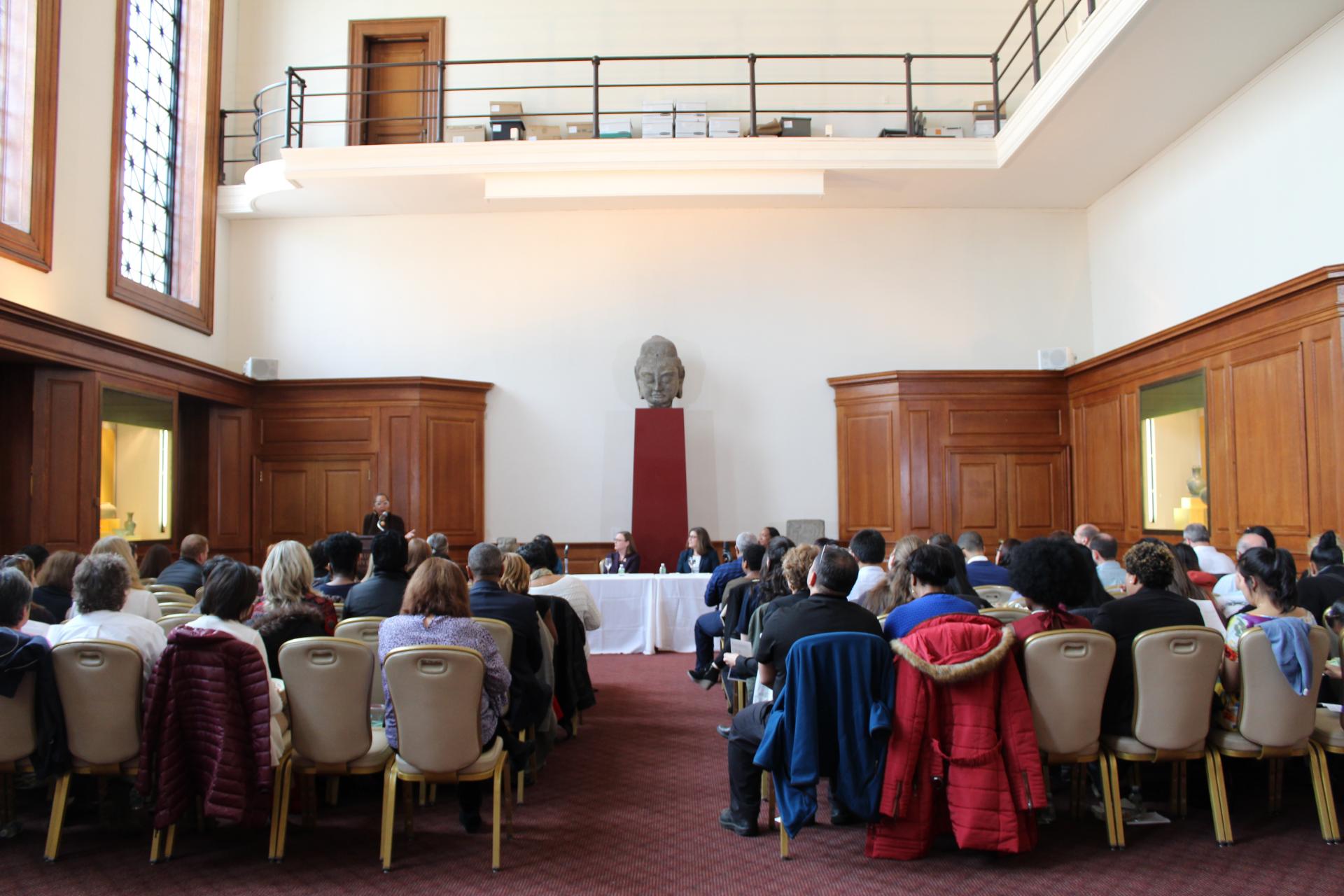 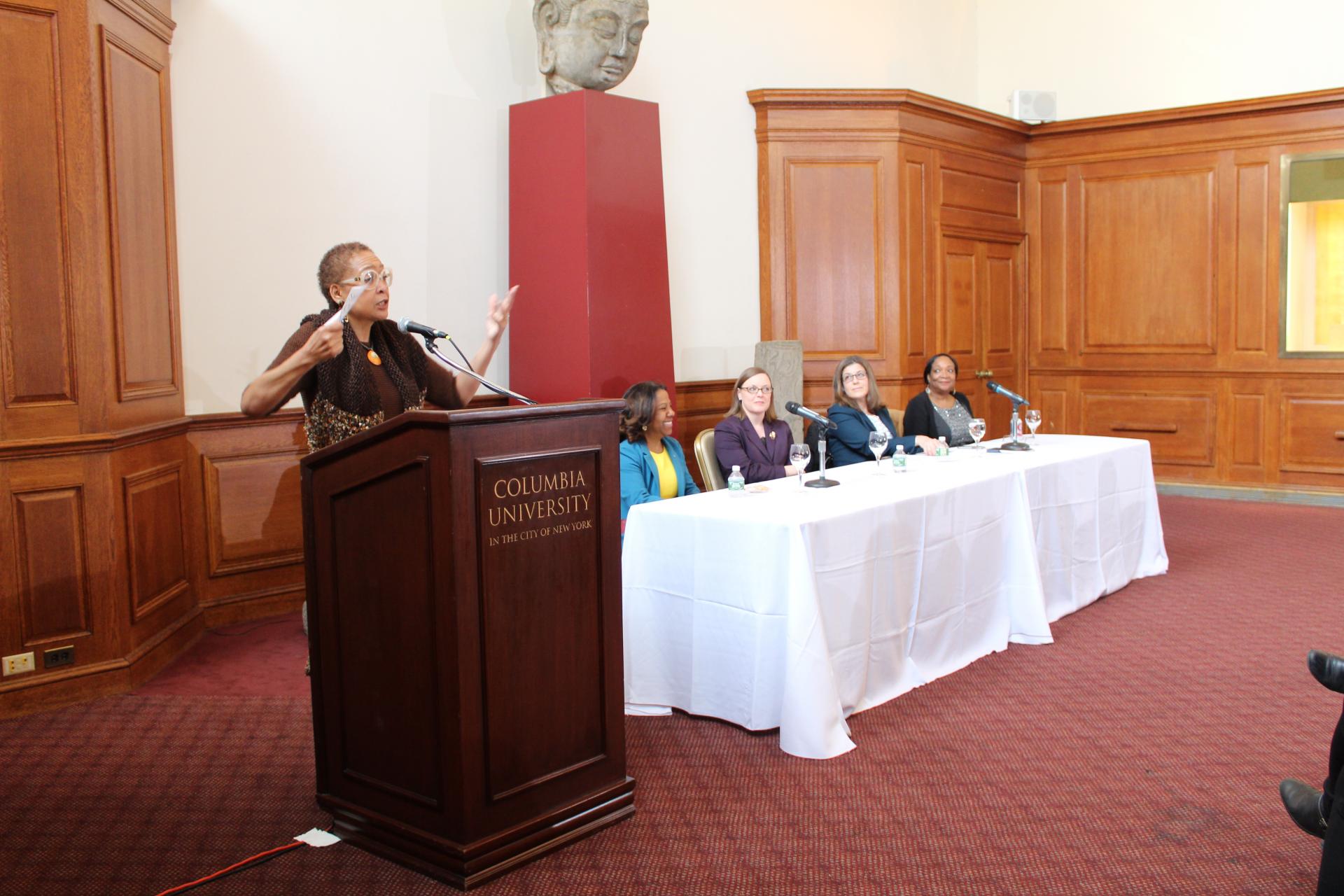 A panel of five women, all leaders in their respective roles at Columbia, spoke to a room of captivated attendees on March 30 in Low Library. The conversation, “Sharing Our Voices: Breaking Down Barriers,” soon transcended topics covered in an ordinary business meeting, delving deeper into tricky subjects like overcoming personal roadblocks in one’s career, how to be a high achiever both at home and at work, and lifting others up through one’s own excellence.

La-Verna Fountain, vice president for Strategic Communications and Construction Business Initiatives, Facilities and Operations, acted as moderator for the panel, but she was also the event’s creator.

“It was one of those three a.m. thoughts,” Fountain said in her introduction. “I realized it was Women in Construction Month and I thought, 'I have to do something.'”

Fountain explained to the audience how the event took shape as if by a force of nature, expressing her gratitude and awe that despite their important roles at Columbia, each panelist she asked to participate agreed without hesitation.

“It tells you something about the character of these four amazing women,” Fountain said. “It’s the mindset that together, we will make this happen.”

Harris is the Medical Center’s liaison for community development initiatives, establishing and maintaining community-academic relations locally and with government stakeholders. She facilitates campus-community partnerships that yield improved community health outcomes while advancing academic health research. When asked about how she manages work and life, Harris said that for her, it’s about integrating the two into a symbiotic unit.

“A lot of the challenges I face at work are similar to at home, and I can deal with them in similar ways,” Harris said. “My work also allows me to dig into my culture—the community that I love—and I’m able to spread that to my kids as well.”

Glancy joined the Office of the President as Chief of Staff in 2006, and she is responsible for providing administrative and strategic support to President Bollinger and his senior staff for University initiatives, as well as day-to-day operations. In her introduction, Fountain described Glancy as a “velvet fist,” citing her ability to balance a relentless demand for excellence with gracious charm.

A notable moment in the conversation came when Glancy answered the question, “What can we do to help our female colleagues be heard in the workplace?”

She advocated for speaking up when a colleague excels, and not just to that person, but to anyone who will listen. “Understand the importance of your own influence,” she said. “And understand that you actually have the power to make somebody else great. Greatness follows greatness.”

In response to a question about what advice the panelists would give to their younger selves, Fishman stressed patience.

“Your career is genuinely a journey, and when I was younger I wanted to go everywhere so quickly,” Fishman said. “There is a lot to learn along the way and you have to appreciate that as you’re going through it.”

Pope plays a prominent role on the new Manhattanville Campus project, managing compliance for minority-, women- and locally-owned business enterprises (MWLBE). Her team is also responsible for reporting on Columbia’s agreements with the community and to the state of New York regarding Manhattanville. Pope works to source capable, diverse vendors to support key University initiatives.

When asked about the most difficult part of her job, Pope spoke about how Columbia’s mission and the surrounding community’s perception of Columbia can sometimes be at odds.

“I would love to have people understand more about the good that we do—and so much of it,” she said. “But I’ll just keep being an ambassador, speaking to people about all the great things Columbia offers to the community. Rome wasn’t built in a day.”

Fountain, who has received city, state and national awards in communications, community and business development, weighed in on the audience’s questions as well. A proud U.S. Army Veteran and the author of two books, Fountain captivated the room with her answer to the question, “What barriers have you faced in your career?”

Fountain said, “The biggest barrier I’ve faced was in my own mind. I used to be a single parent on welfare, and I didn’t know if I had anything in me that could achieve. Now, I’ve learned to keep my eyes on the prize; I don’t even look at the barriers anymore.”

Even before the event was over, attendees expressed their desire for more. A suggestion that Columbia implement a mentorship program, including more events like this one, garnered approval from both audience members and panelists alike.

“Let’s make it happen,” Fountain said to the panel. Her next question, “Who’s doing the next one?” was met with both laughter and applause.

When the panel was over, a young woman from the audience approached Pope, asking about the culture at Columbia.

“She asked if there was a diverse student body, and what schools seemed to have the greatest inclusion,” Pope said. “I answered her questions to the best of my ability, and I asked if she planned to apply for the fall. She said ‘Oh, no, I’ve got a way to go. I’m only a sophomore in high school.’”

When Pope asked the young woman how she learned about the panel, she said she was walking around and familiarizing herself with the campus when she noticed the room full of people. The conversation seemed lively and relevant to her interests, so she came in and sat down, Pope said.

“How amazing is that? She felt comfortable enough—just by who she saw in the room—to join,” Pope said. “I found this incredible, and I gave her my card. I’m hoping we’ll see her bright eyes and curious spirit on campus in a few years.”

A panel of five women, all leaders in their respective roles at Columbia University, spoke to a room of captivated attendees on March 30, 2017 in Low Library.
Tags
Construction Business Services and Communications Minority, Women and Local Initiatives